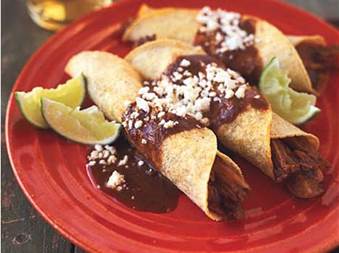 2 tomatoes cut in half crosswise

5 tomatillos cut in half crosswise

Toast guajillo chilies, ancho chilies, and chipotle chilies in a dry pan over medium heat, stirring constantly, until warm and aromatic, about 3 minutes. Transfer to the blender.

Heat 2 cups chicken broth in a saucepan until it begins to simmer, about 5 minutes. Pour broth into a blender.

Toast dinner roll pieces and tortilla strips in a dry pan over medium heat, stirring constantly, until lightly browned, about 3 minutes. Transfer to the blender with chicken broth and chilies

Allow the chilies and toasted bread and tortillas to soak, fully submerged, in the chicken broth until softened, about 10 minutes. Blend the mixture until smooth.

Cook tomatoes and tomatillos in a dry skillet on medium-high heat until soft and blackened, 3 to 4 minutes per side. Place tomatoes in the blender with the chili puree.

Melt lard in a large skillet over medium heat. Stir in onion, garlic, peanuts, raisins, cumin seeds, thyme, cinnamon sticks, cloves, and allspice berries; cook and stir until onions are soft and golden, 5 to 8 minutes. Remove the cinnamon sticks and other whole spices; add onion mixture to the blender with the chili-tomato mixture and blend until smooth.

Pour chili puree into a large saucepan over medium heat. Stir in chocolate, additional chicken broth, sugar, and salt. Bring mixture to a simmer; stir until chocolate is melted and sauce is thickened and slightly reduced, 10 to 15 minutes.