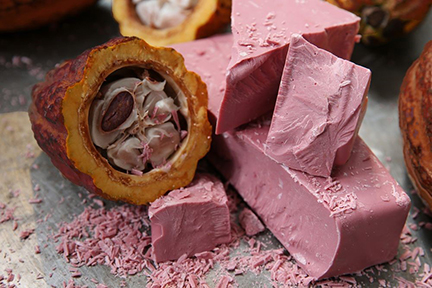 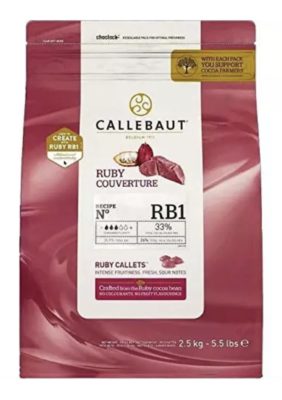 A breakthrough by a Swiss chocolate maker expands the industry’s hues beyond just dark, milk and white.

By Isis Almeida and Corinne Gretler

Barry Callebaut AG, the world’s largest cocoa processor, has come up with the first new natural color for chocolate since Nestle SA started making bars of white chocolate more than 80 years ago. While it has a pinkish hue and a fruity flavor, the Zurich-based company prefers to refer to it as “ruby chocolate.”

The innovation, based on a special type of cocoa bean, comes after about a decade of development, according to Chief Executive Officer Antoine de Saint-Affrique. The chocolate, unveiled in Shanghai Tuesday, has a natural berry flavor that’s sour yet sweet, according to the Zurich-based company, which works behind the scenes to produce chocolate sold by all the major producers including Hershey Co. and Cadbury.

“It’s natural, it’s colorful, it’s hedonistic, there’s an indulgence aspect to it, but it keeps the authenticity of chocolate,” the CEO said in a telephone interview. “It has a nice balance that speaks a lot to millennials.”

The new product may also appeal to Chinese consumers, a nascent market for chocolate, De Saint-Affrique said. The company has tested the product in the U.K., U.S., China and Japan through independent consumer research carried out by Haystack and Ipsos.

“We had very good response in the key countries where we tested, but we’ve also had very good response in China, which for chocolate is quite unusual,” he said, adding the color is attractive in that market. Innovations in chocolate often take years because of the complex structures and the challenge of maintaining texture and taste. Nestle SA scientists have found a way to reduce the amount of sugar in chocolate by as much as 40 percent, though it won’t be available in confectionery products until next year. Barry Callebaut also sells chocolate that withstands higher temperatures, a goal chocolate companies had sought to achieve for decades.

The beans used to make ruby chocolate come from Ivory Coast, Ecuador and Brazil and the unusual color comes from the powder extracted during processing, De Saint-Affrique said. No berries or colors are added. While other companies including Cargill Inc. already produce red cocoa powder, this is the first time natural reddish chocolate is produced.